As content creators, we learned real quick just how much it sucks when someone steals our content. The “OnlyFans leak sites” are a living nightmare for us and it seems like a never-ending battle to stop these guys from stealing what we create for OnlyFans and giving it away for free.

It sucks. Trust me, I know. 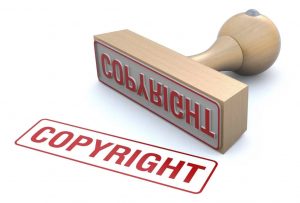 And it’s become a never-ending battle of trying to stop websites from posting your content illegally.

The takedown or demand letter is what is known as a DMCA takedown request.

The Digital Millennium Copyright Act or DMCA for short is a 1998 US law intended to update copyright law for electronic commerce and electronic content providers. It criminalizes the circumvention of electronic and digital copyright protection systems.

In short, it’s a law passed to help stop people from stealing your shit (anti-piracy).

The first thing you should know is, you must be the owner of the content that you are demanding be removed.

If you don’t own the content in question, you don’t have the legal right to demand it be removed.

Sending a False DMCA is a crime.

If you film a scene for your OnlyFans page, then you own that content. You filmed it, you own it. That’s the basics of how that works.

Last March Michael Vegas issued a false DMCA to try and have an article he doesn’t like removed.

In his DMCA claim to Google, he claims that I illegally used photos (or videos) that he owned from his website “Peg Him”. 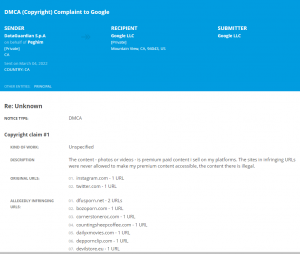 Obviously, that is not okay. A girl has the right to say no to anyone she wants for any reason. A girl doesn’t even have to give you a reason. HER BODY HER RIGHT!

I called him out for it. He wasn’t happy about it and tried to illegally use the DMCA process to get the article removed.

While the DMCA law is great for stopping people from stealing your content, it’s actually illegal to abuse it.

This is called copyfraud – in short copyfraud is a false copyright claim.

If you submit false copyright claims to companies like Google you can actually face punishment from Google itself. Imagine your name suddenly getting banned from Google and no longer being able to use Google services like Gmail, and Youtube.

But in addition to getting banned from Google, you also have other financial and legal consequences.

In civil court, if you send a cease-and-desist letter (a false DMCA) to an infringer, there is a risk that the infringer may file a lawsuit in the infringer’s jurisdiction naming you as a defendant and seeking a declaratory judgment that your copyright is invalid.

Criminally, iIf you send a DMCA takedown notice that is both false and meant in bad faith (such as to harass, or doesn’t state a real claim), you have committed perjury. Though unlikely, if the party you sent the takedown notice to decided to pursue this in court, you could face all of the consequences that your state imposes on people who lie in court.

Civil defamation penalties can be in the millions. While on the criminal side, you can up to five years in jail and a few thousand dollars in fines. As DMCA is a federal law these fall under federal perjury instead of the state.

When you file a false DMCA you are lying under oath. It even says it right there on the form prior to submitting it.

To “perjure” yourself is to knowingly make misleading or false statements under oath or to sign a legal document you know to be false or misleading. This crime is taken very seriously because the foundation of the legal system depends on trust and credibility. After all, just one sworn statement has the power to tip the scales of justice and dramatically alter someone’s life.

As content creators, we have to take all aspects of the law seriously. This means we have to use the law to fight to stop people from stealing our content, while at the same time, being careful not to accidentally abuse the law that was created to protect us.

Believe it or not, many adult performers do this without even realizing they are.

If you hire a DMCA service, there is a very good chance they have filed a false DMCA on your behalf. Paying someone who lies on your behalf, doesn’t get you off for the lie. 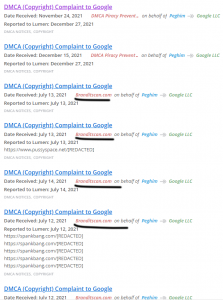 Out of the 424 DMCA’s Michael Vegas sent out that day (the one where he tried to issue a fake one with me) I started going through the list. While some are legit stolen scenes from his website, not all. In fact, I found more than a few take-down requests for videos that didn’t even star Michael Vegas at all, let alone belong to his website.

Yet the DMCA company you hired issues a takedown notice demanding they remove the content. Why? Because they use cheap AI and don’t check their work. They just randomly scan the internet for any content feature you or with your name and issue that takedown notice.

Don’t get yourself on a banned list – so that no company is willing to hire you by using one of those DMCA companies. It’s just not worth the risk.

You can’t send out a take-down demand for content you don’t own.