I’m not surprised to hear that yet another performer has come forward with a story about Hoby Buchanon – this time it’s Ginger Banks (@gingerbanks1).

Ginger Banks appears to have had a similar experience as others. He doesn’t seem to get that no means no. No doesn’t mean “convince me”. How hard is that to understand?

If you contact a performer and ask her out or ask to book her for a scene and she says no, that isn’t an invitation to keep asking her. No, means no.

That in itself is just a fucking insult. But even if he offered her all of the money in the world it wouldn’t change my mind. NO MEANS NO – PERIOD.

There are a few stories about him on Mike South about him.

The first story came out in 2014 and they haven’t gotten any better. 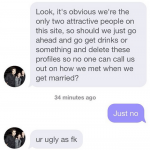 Anywho, I just wanted to make sure you know that if you get contacted by this guy, might want to avoid him.